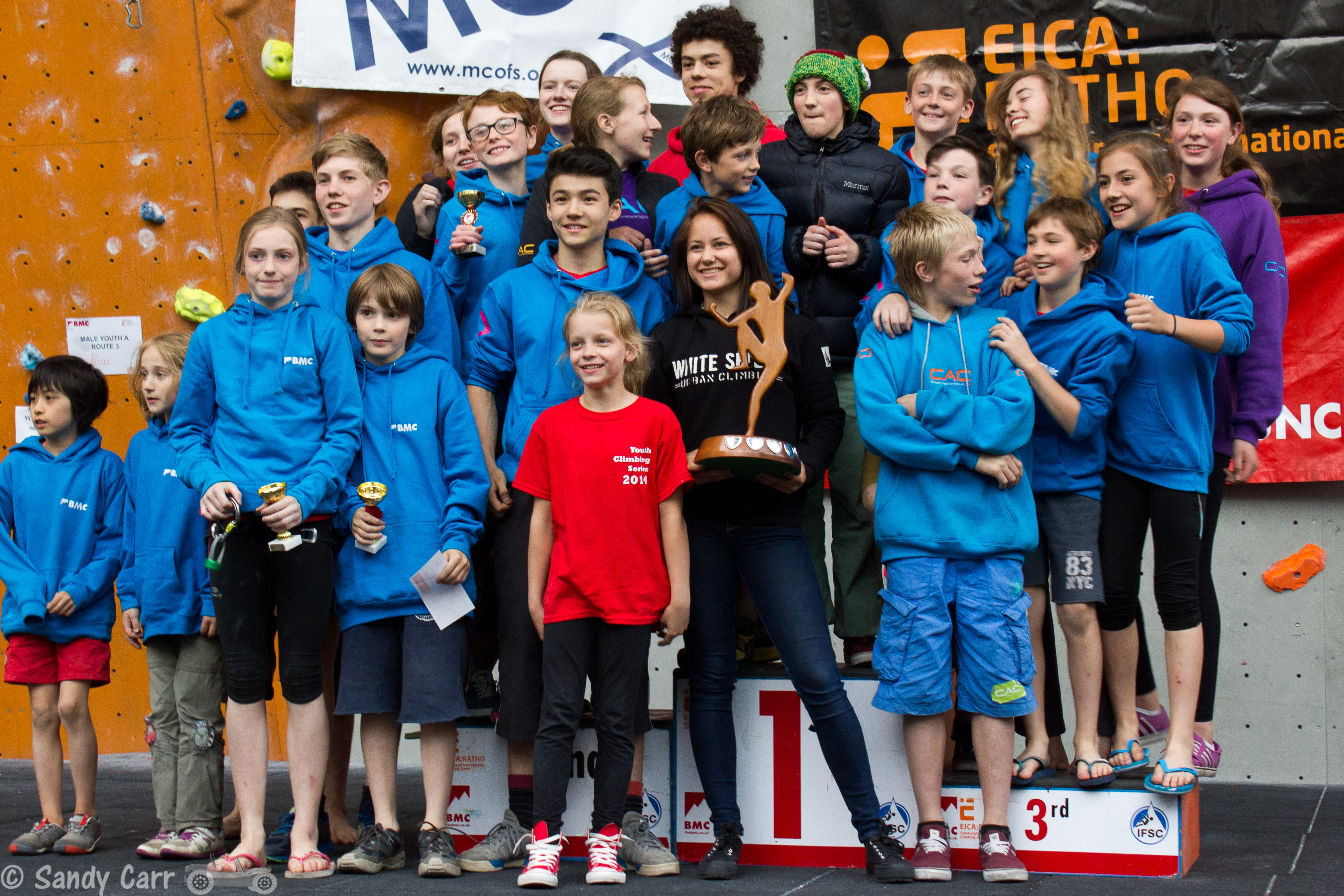 Every year the British Mountaineering Council (BMC) host the Youth Climbing Series. This year, the London and south east region was split into two smaller sub-regions – north and south. This meant the first two rounds were essentially qualifying rounds to the regional finals.

This year I have been coaching various youth climbers in the region and the whole of the Surrey Sports Park squad alongside Guy Davenport. For those that I have been coaching since January peaked perfectly. The whole team (those going to Ratho and those staying at home) were going from strength to strength – peaking perfectly for the British finals.

For those that I have been coaching outside the squad, it has been a matter of working on their weaknesses and getting used to competition stresses, both physically and mentally looking at various comp practice sessions.

The day arrived and I have to say I was excited more than anything. Really looking forward to how they were all going to climb. I was confident in their training and their current form and rightly so.

From Surrey Sports Park, we were taking Up Sam Jenner (boys B), Issy Adams (girls C) and Finley Adams (boys E). From outside the squad, Imogen Horrocks (girls B), Beth Christian (girls D) (who are part of the White Spider squad) and Amelie Clarke (girls E).
The format for the finals proves really hard for the climbers to stay warm and prepared for their next climb, switching from boulder problem to route and vice versa constantly. Along with the huge rests between climbs the temps in the arena meant that the climbers were constantly in need of a pulse raiser to get the blood pumping and warm up climbs.

It would be far too long a blog to go on about individual moves and climbs, but all of the guys did incredibly well, helping London and south east win for the 5th year on the trot! 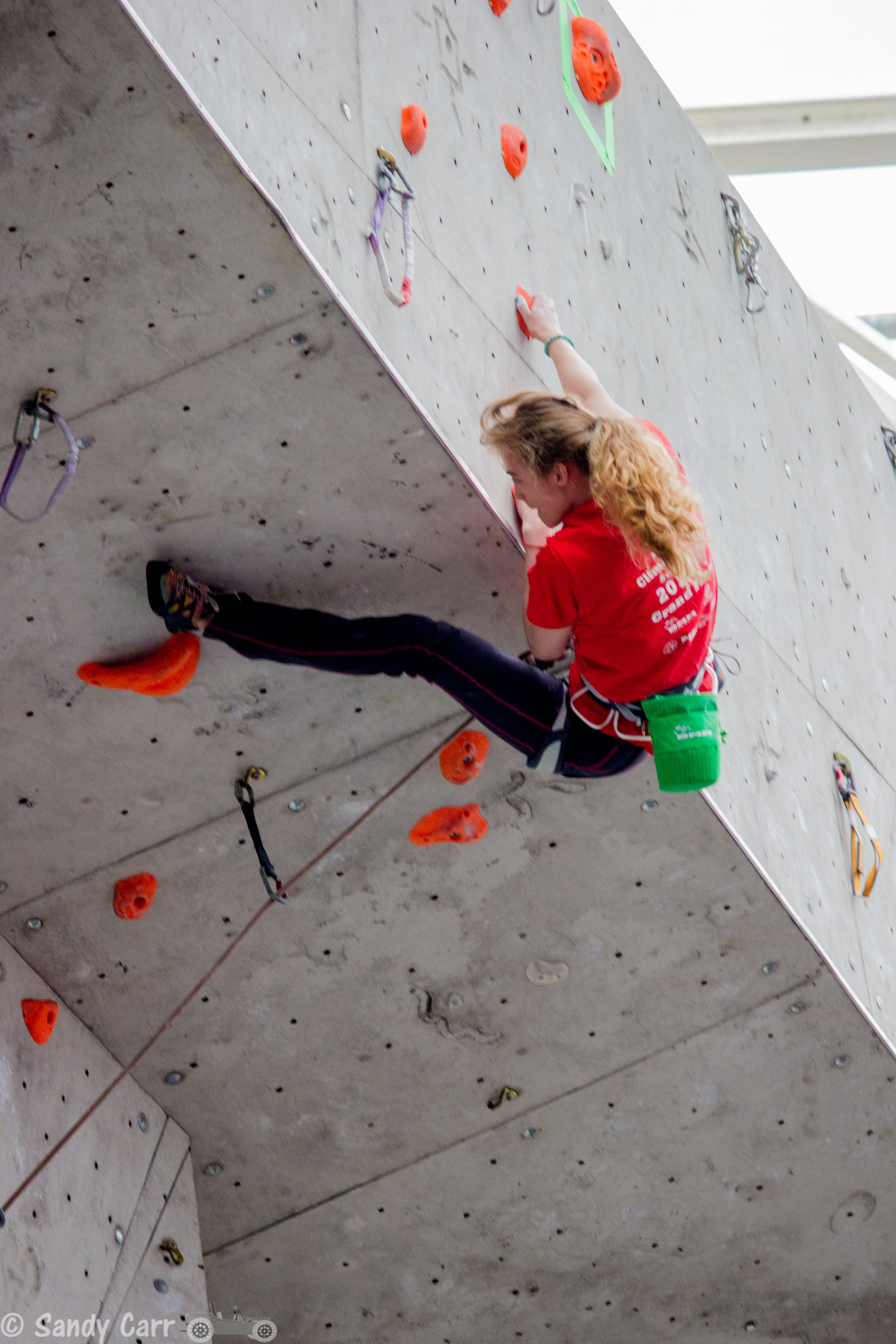 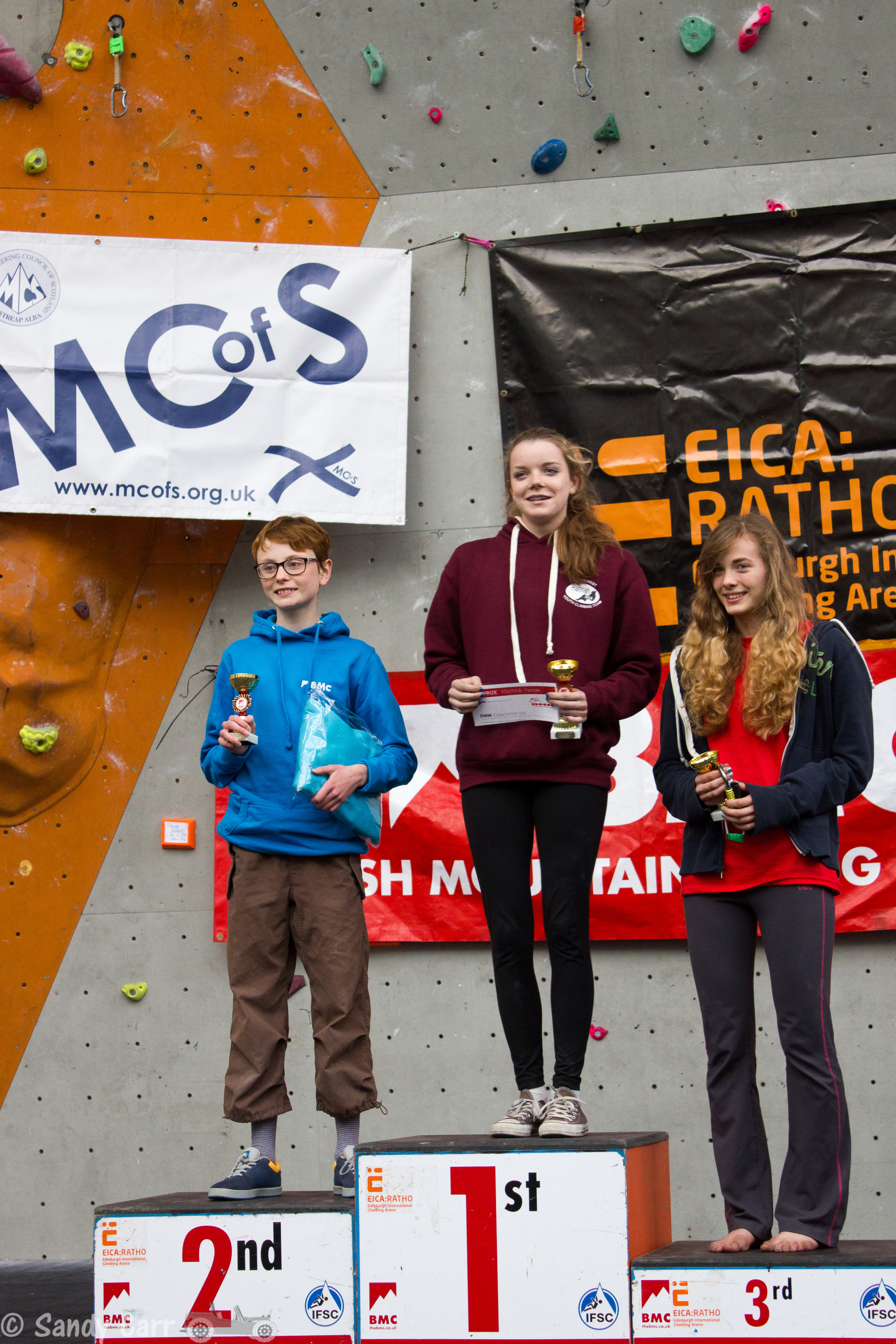 Imogen Horrocks digging in deep to get 3rd!(Photos Sandy Carr)

Highlights were Immy putting in a strong performance on the girls route 1 and flashing all of the problems to come in 3rd;
Sam tearing down everything in his path, getting the hardest boulder problem 3rd try (which was quicker than any other), flashing his first two routes and making a few tiny errors on his third route to put him 5 points off 1st;
Issy climbing her heart out – flashing all routes, flashing first two problems and then making a little error getting her third boulder second go. This actually meant 2 climbers were tied for first and two third (Issy). As a result, after cooling down and thinking the long day was over, we (myself, Freddie Naish and Issy) were put behind the wall and into isolation ready to try Boys A route 3! Issy had never been in this experience for real, so it was straight into her home comforts – routine warm up, and reassurance that she just needed to climb as she had been and have fun – she went out and got higher than anyone else – higher than some of boys A;

Last but not least, Fin – he worked hard throughout the day, putting in some beastly performances, highlighting how strong this little guy is. Finley came in 2nd this year and it really was well deserved. He looks up to many of the world cup circuit climbers and I have full confidence that he will be up there in the future too.

All of these names will be very prominent in the competition climbing in the coming years so keep your eyes out for them. 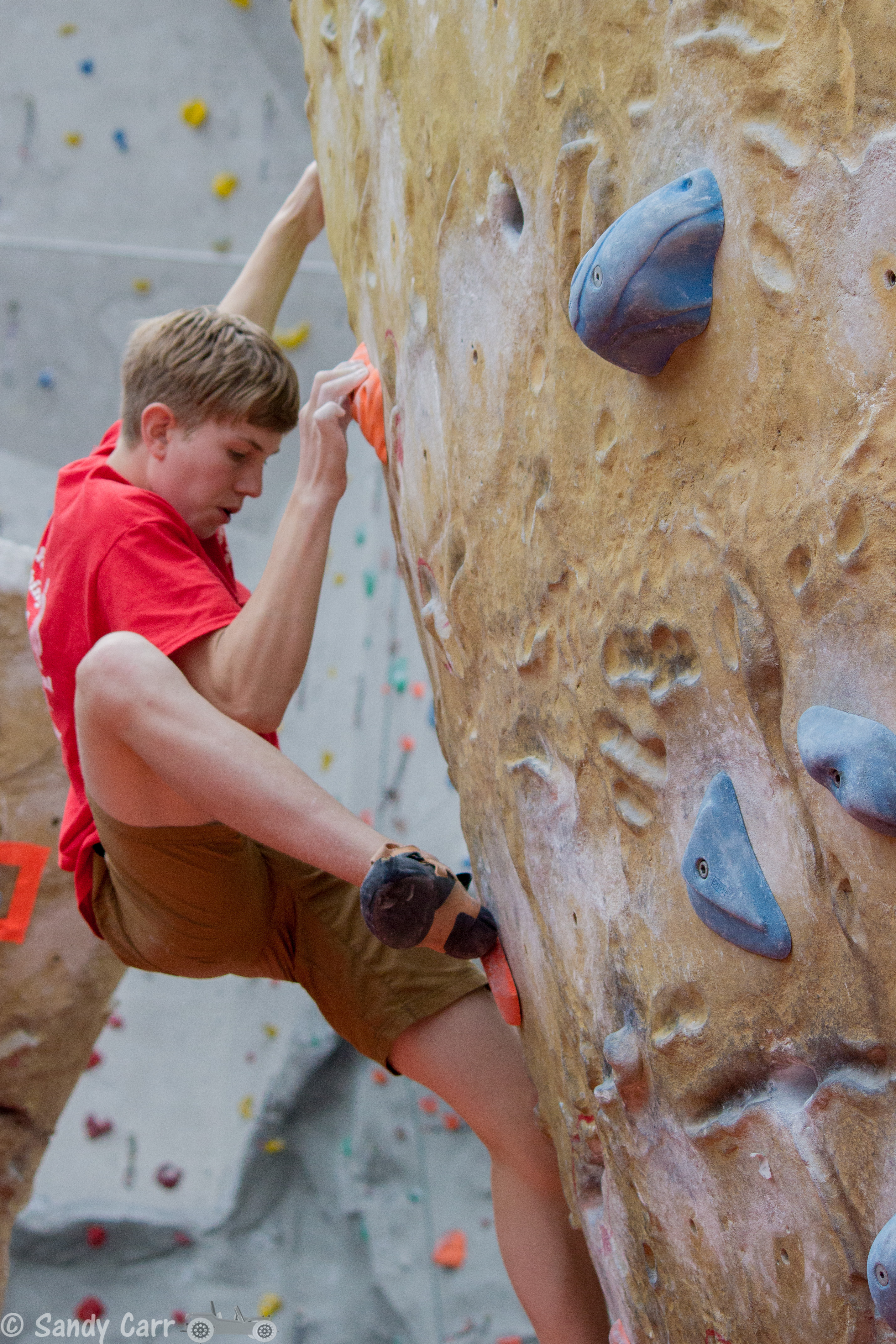 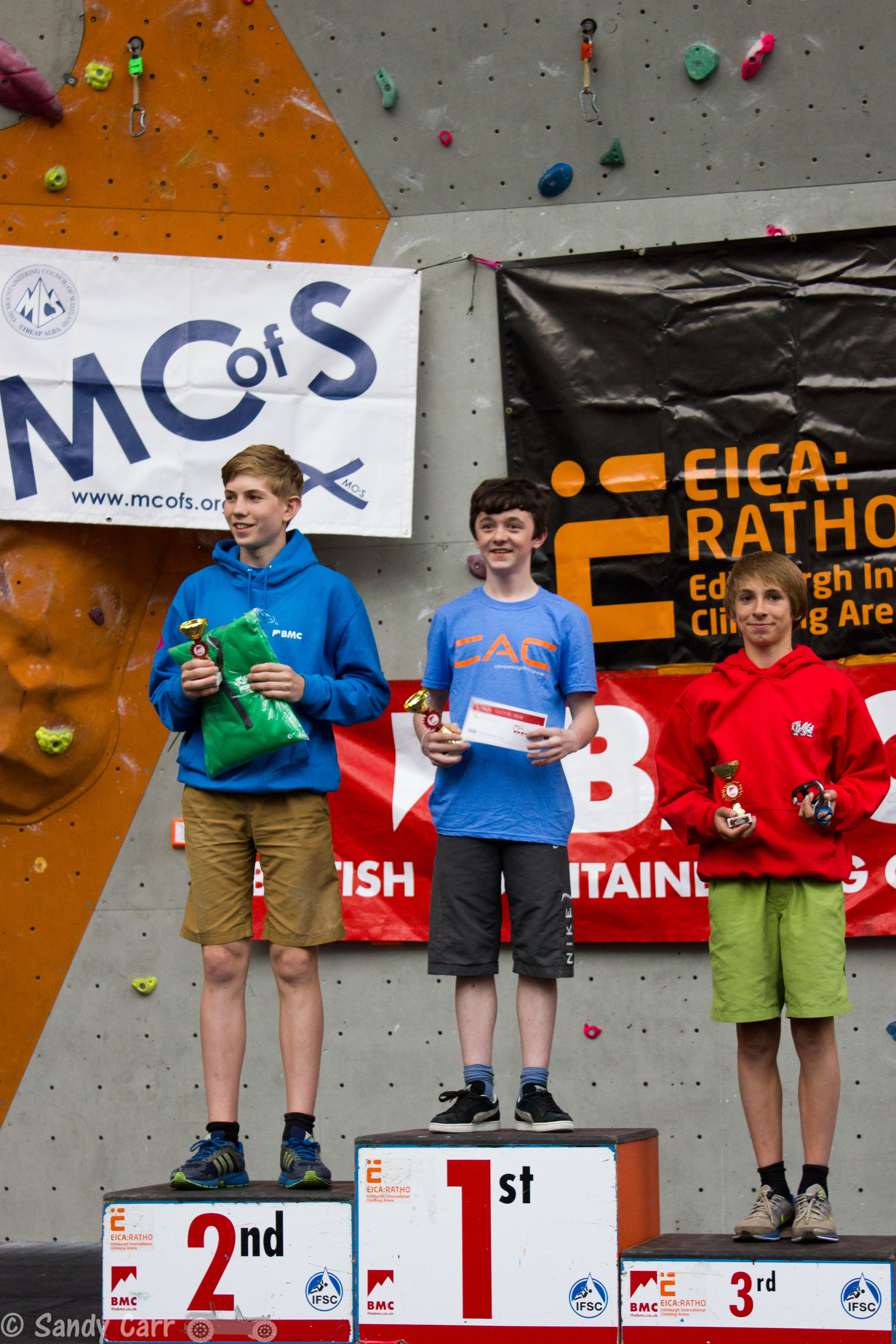 Three from Surrey and three on the podium. 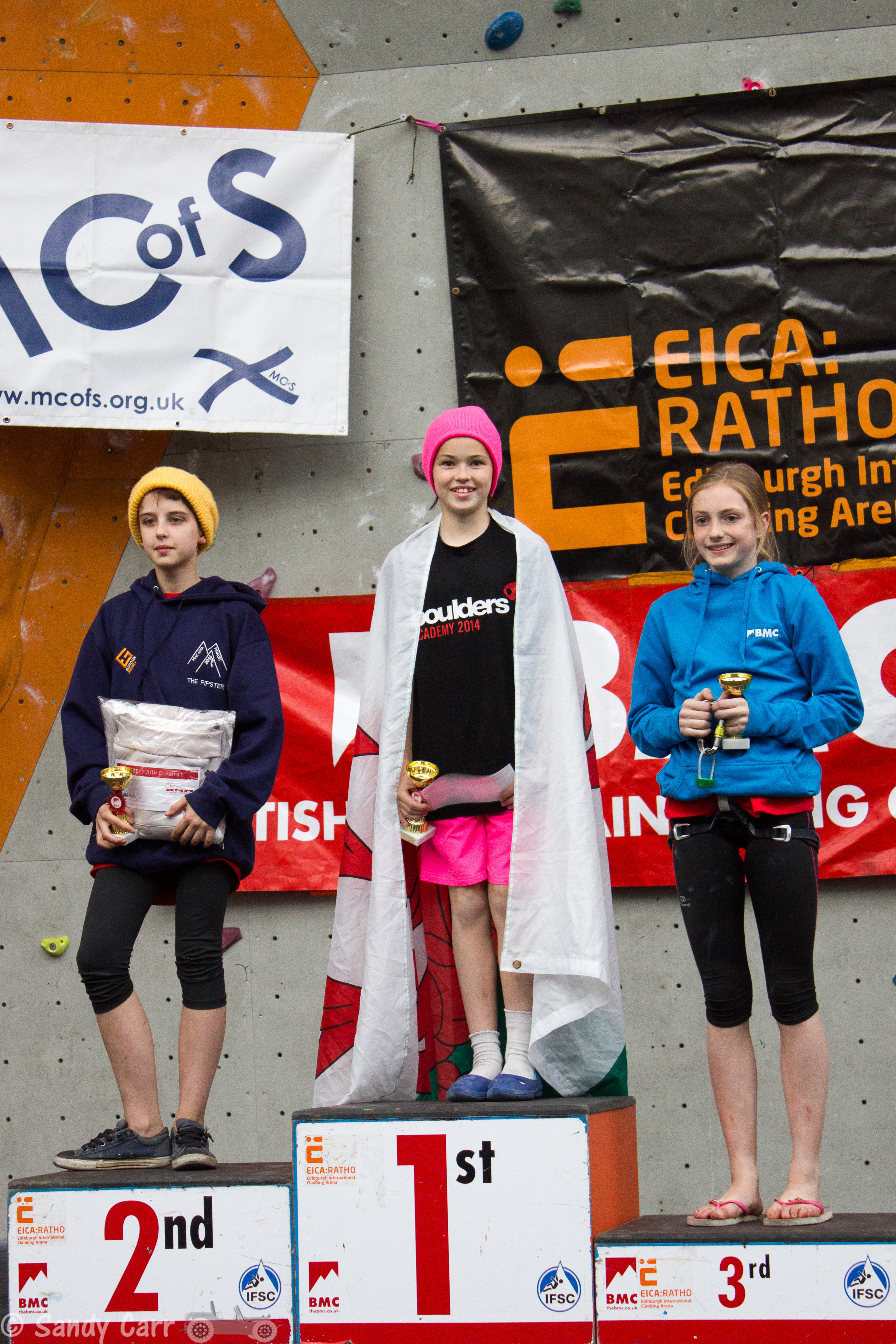 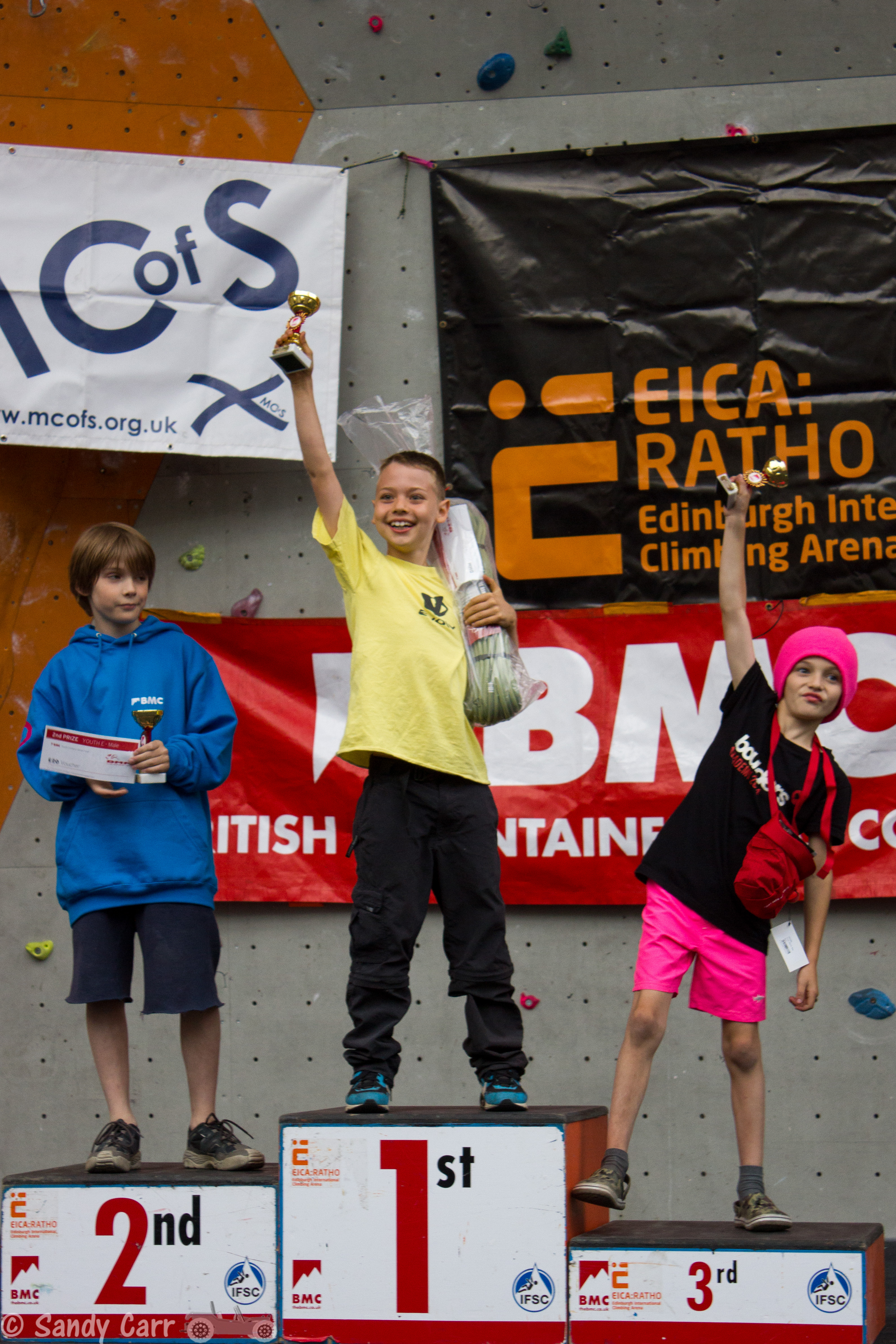 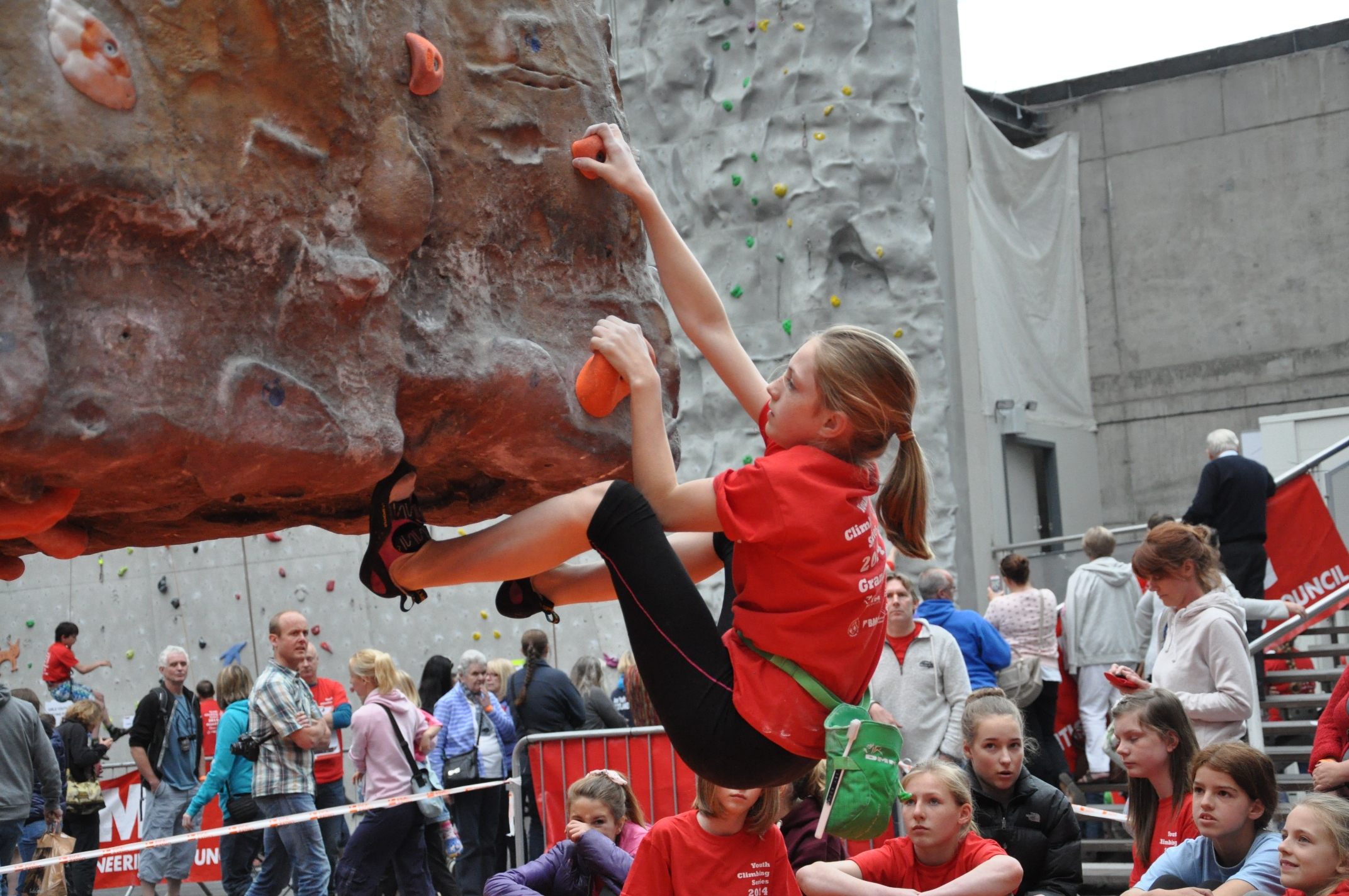 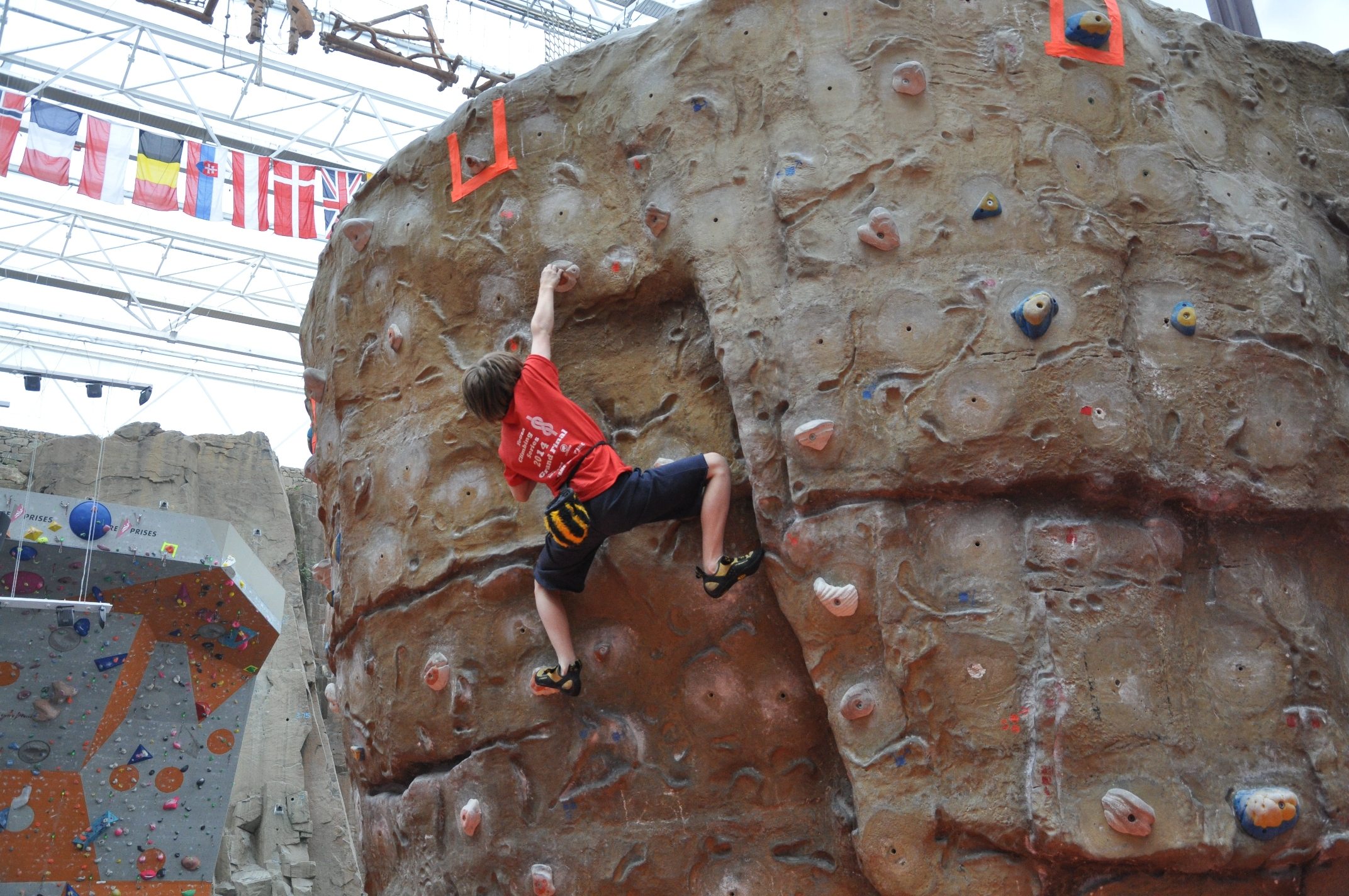 It was a long day, but everyone enjoyed it. The routes were set well, although I believe there were some last minute admin changes meaning boys B had a 4, 5+ then 7b/+ for routes?

Despite being a long day, the competitors don’t actually climb that much, so as a reward (always planned), we drove south and climbed at Carrock Fell with some good friends taking Sam (Jenner) along with us.
Not ideal temps, but the boy showed his training had paid off – showing us all up really!!! 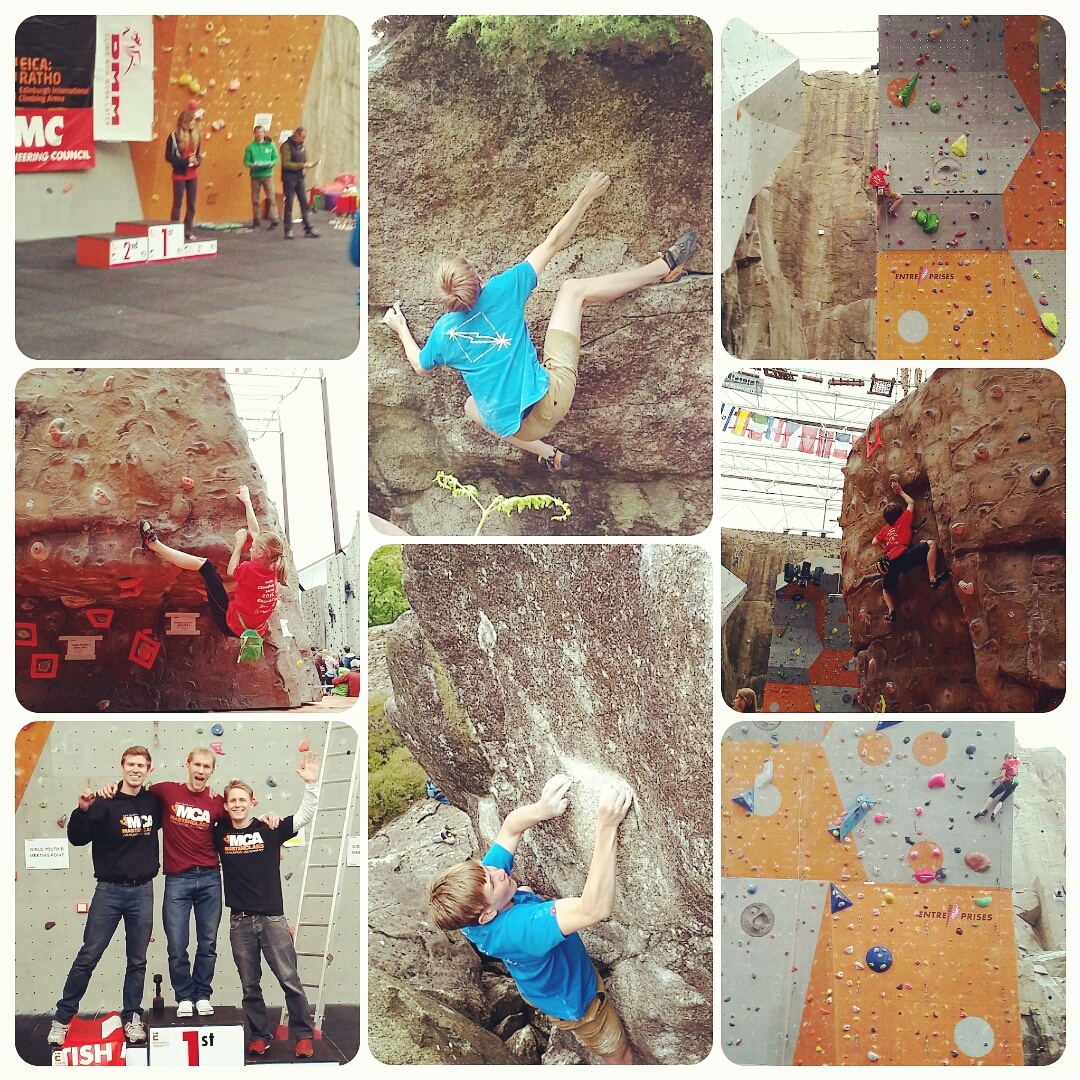 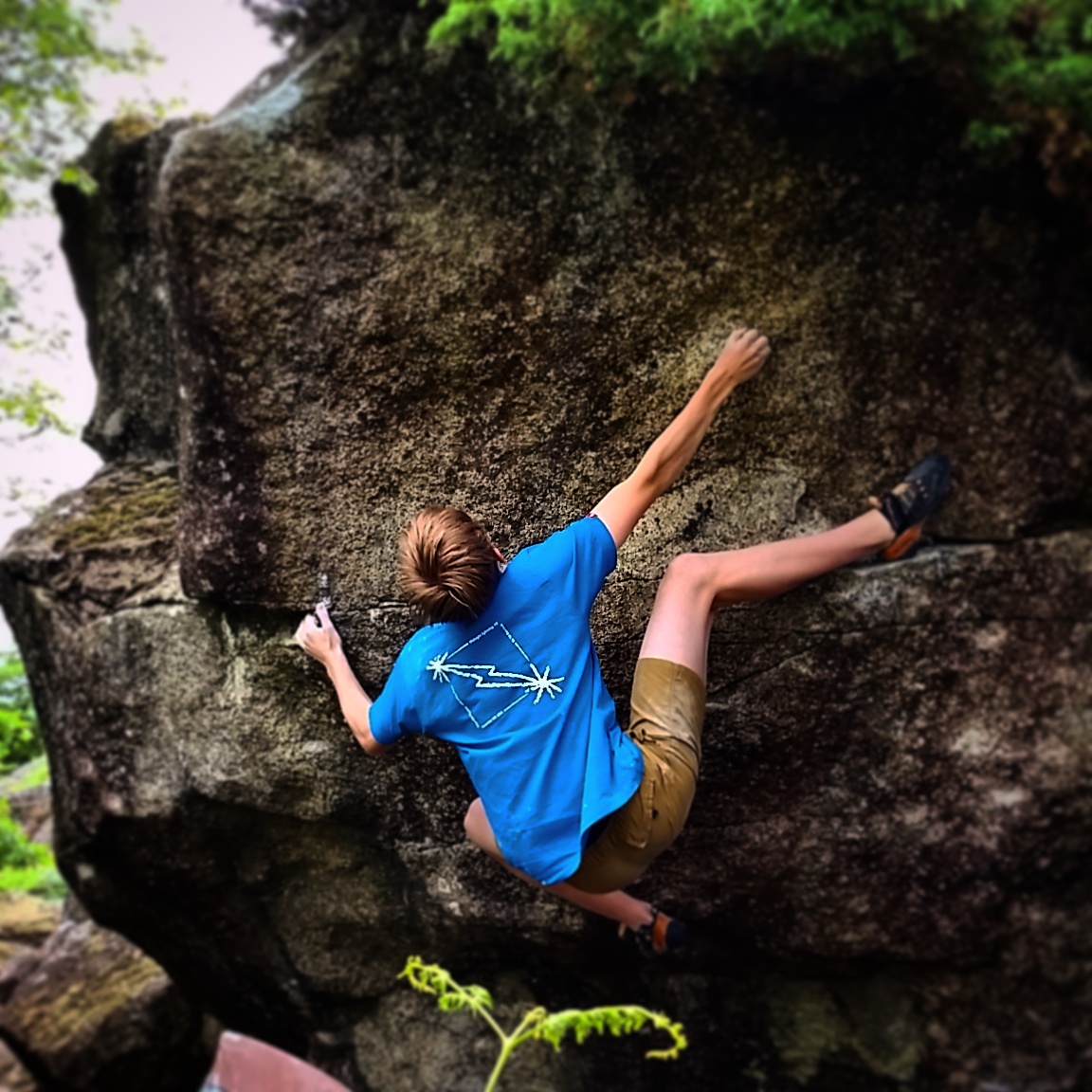 I would like to thank all of the parents who have supported the efforts of the team and driven their children from wall to wall to help us deliver our programme. On top of that, Climbers Against Cancer for the tops and Theraband for the warm up goodies. Sam is also supported by Scarpa and Crimp Clothing.

For now a rest period and on to the next competitions. These guys are climbing so well, it is just so exciting to see how they perform at each comp. A few new additions to the team and we will really be pushing things to the next level, watch this space.